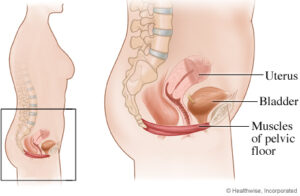 One young adult male who competes in Olympic lifting came in for hip pain and tension. After two treatments, his symptoms improved only slightly. Finally, we treated his pelvic floor for 5 minutes, and it proved to be the key that unlocked his hips.

An adult male came in for low back pain. Sure enough, his pelvic floor had significant dysfunction. We corrected it in 5 minutes.

A recently married woman had lost interest in sex because of the pain it created. After 5 minutes of pelvic floor correction, she later reported, “My husband is now your biggest fan.”

Finally, a mother brought in her eight-year-old daughter who had been dealing with the embarrassment of “leaking” on a daily basis. We worked on her pelvic floor for 5 minutes, and she’s been “leak free” since. From her mother:

“I brought my 8 yr old gymnast daughter to Noah after realizing her pelvic floor needed some attention. (She) was leaking a bit when she urinated and it was becoming a real problem each time she exerted herself. I brought her to Noah and he was able to ‘fix’ her within minutes. His bedside manner with children is every mother’s dream. He relaxed her with essential oils and made her feel comfortable as he took us verbally step by step through the process. Noah produces healing results!”

Pelvic floor dysfunction comes in all shapes and sizes. It can lead to back pain, hip pain, loss of athletic performance, sexual dysfunction, and incontinence. These are all big issues that affect people’s daily lives. And, as you’ve figured out by now, it usually takes 5 minutes to fix. Some problems are complex. This isn’t one of them. Get evaluated by a P-DTR practitioner!

I returned to DPPS for regular treatment a few years after having good success with Noah resolving a shoulder injury I had sustained. As an athlete and performing artist I can truly say that Denver Pain and Performance Solutions is what makes my rigo... (Read More)

Written by Hillary
Denver Pain and Performance Solutions is rated 5 stars over 98 reviews.